Introducing Chatsbrook: Our First Year at The Royal Norfolk Show

Why it is worth attending the Norfolk Show EVERY year…

Introducing Chatsbrook: Our First Year at The Royal Norfolk Show

Since 1954 The Royal Norfolk Show has graced the Norfolk Showground with its presence and has subsequently engrained itself into the hearts and minds of the locals.

Having integrated itself into Norfolk culture, individuals look forward to the two-day spectacle all year round. So much so that by the time the summer season arrives, people are itching to step foot onto the grounds. In fact, this year alone over 81,000 people chose to be a part of the festivities- And why wouldn’t they? The show is a melting pot of different cultures and industries, amalgamating together to create an action packed and pleasing microcosm. Friendly faces line the avenues and there is always plenty to get your teeth stuck into. Across the two days you have the opportunity to watch countless shows. From Equestrian and Dog Shows, Livestock Competitions, Horticultural Displays and even a stunning Air Show from RAF Falcons, it’s no wonder it attracts so many families and it was wonderful to be able to see so many people enjoying the day.

Part of the reason the Royal Norfolk Show is so enticing is that attendees feel a real sense of community. Over 80% of all businesses showcased are local businesses from Norfolk.  For two days local individuals can support and celebrate local businesses-just like ourselves. To witness the bustling avenues of the showground is to experience unity through what connects us; Norfolk itself. People even travel from far and wide to be part of the celebrations, and this year was no exception as it attracted Sophie Countess of Wessex to its doors.  If you were lucky enough to have attended on the Wednesday, then you may have noticed Sophie drinking shots and even getting stuck in with the prize pigs!

This year was more special than usual to team Chatsbrook as it was the first year since Chatsbrooks’ conception that we had a stand of our own. After almost one full day of setting up, it was fantastic to deliver on a stand that far exceeded all expectations. In preparation for the show we had spent quite a few weeks quietly working behind the scenes.  Having set it up, it was incredible to see that all of our hard efforts had paid off!  Inside, we had brand new marketing boards showcasing our business as well as our Lotus Driving Academy Track Experience competition.  Throughout the two days, the team were delighted to see the amount of interest that was generated through our competition. We didn’t want children to miss out either, so we even organised a mini competition for them to be part of! 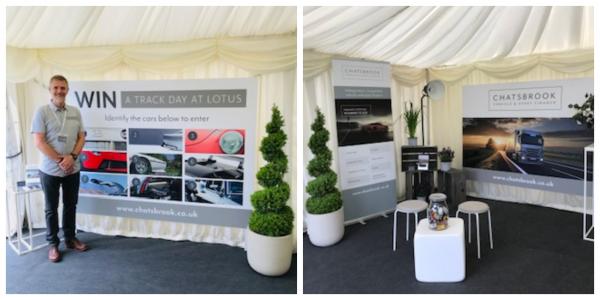 But the competitions were not the only aspect that was drawing people into our stand. From the moment the gates opened to the public at 8AM on the Wednesday, hordes of people stood in complete awe and bewilderment at the Audi R8 V10 Coupe that sat at the front of our stand. Suzuka Grey, sleek and mesmerizing, it attracted people and it was our pleasure to interact with them. This gorgeous car was loaned from our friends at Audi Norwich who kindly let us display it.

The Chatsbrook team are extremely grateful to have had the opportunity to showcase our business in a beautiful setting. The show itself proved beneficial to us as it enabled us to network with local businesses as well as to provide a setting for a temporary office so that current and prospective clients could pop in and discuss any questions they may have.

Furthermore, it was incredible for us to discover other local businesses that we hadn’t heard of before. Just like us, the show proved successful in broadcasting brand names and subsequently helped all of us to reach a wider audience. Although competitor presence is a known aspect of the show, it was heart-warming to see people engaging and supporting independent businesses-this was most obvious within the Adnams Food and Drink Hall where over 100 different producers resided. The Hall was filled to the brim with Chutneys, Cheeses, Fudges and baked goods and there were queues for all of them! Chatsbrook wish that we could have experienced all that the food stands had to offer as each stand was unique and looked utterly delicious!

As the hours ticked past on the last day, we were sad that it was coming to a close.  Whilst the riders and their horses cooled down in the arena and the parade made their way out, we looked round and saw all that we had achieved. A jar full of entries for our two competitions, consolidated relationships and new enquires to enjoy. The most important thing that we saw was our team beaming, happy to have been there and pleased to have interacted with so many. The curtain may have been dropped on another year of the Royal Norfolk Show, but we are already excited to attend the next one.

Thank you to everyone that took part in our competition and to everyone that popped in to say hello. It was a real privilege to have had a presence there. If you visited, we would love to hear from you! Email us at info@chatsbrook.co.uk or call 01603 733500 to touch base.