Witness a wealth of Classic Team Lotus through our eyes

I must admit, I have never been on a tour that celebrates one of the most iconic Formula One teams as this before. So, when I found out that the Director of Chatsbrook, Adrian Brooks, and I had been granted the privilege of touring the Classic Team Lotus headquarters – I jumped at the chance!

When the day finally arrived, both Adrian and I were not only excited to gain an insight into classic team Lotus, but to also meet the team!

Upon arrival, the headquarters stood proud in the beaming sunlight. Sitting adjacent was the old factory, almost shuddering in its wake. The new building symbolised an almost, rebirth of Classic Team Lotus, and team Chatsbrook were eager to get in!

The entrance consisted of a gift shop, filled with team Lotus merchandise and other budding Lotus enthusiasts. The brand colours of emerald green and yellow were emphasised as the light poured in from the windows.

We were happy to be there.

Within moments we were greeted by Richard Parramint and directed towards what I can only describe as a meeting room. The hospitality knew no bounds as we all sipped on tea or coffee and nibbled on a few appropriate ‘lotus’ biscuits. During this Richard provided a personal account of his history with Lotus. His passion for the brand oozed out keeping the audience hanging on his every word.

Afterwards, we then engaged in a presentation that provided a snippet into Classic Team Lotus history. The film itself contained the original black and white recording of Formula One races, which only added to that iconic gravitas of where we were.

After the film ended, the energy of the room felt recharged. We had all been impassioned by the presentation. Excited, we all made our way to the entrance of the workroom. My first immediate thought was as to how clean it was! In my mind, mechanical engineering and almost clinical standards were not compatible – but I was proven wrong. Then it dawned on me, the engineers must have so much pride in what they do, that it is out of respect to the brand that they keep it that clean!

Around the room were workstations, with current Classic Team Lotus projects that were being worked on with a very special project restoration underway being 12-301 prototype 12, the first Lotus single seater, 63 years after she was revealed at the 1956 Motor Show which was found languishing in the Piggeries at Beaulieu since 1970.

Each car owned by individuals who wished to restore the vehicle back to its former glory is undertaken by some of the Team Lotus personnel who actually designed, built and operated the cars originally. The cars were suspended from the ground as it provided easier access for the mechanics, however, it also meant that the group could appreciate every angle of the craftsmanship. Every moment that passed, I witnessed something new, something divine and something that I had never seen before. I gazed at the inner workings of the engine wondering how on earth something so functional could look so beautiful. The quality of care to each car just highlighted how special they were and how grateful I was to be there. 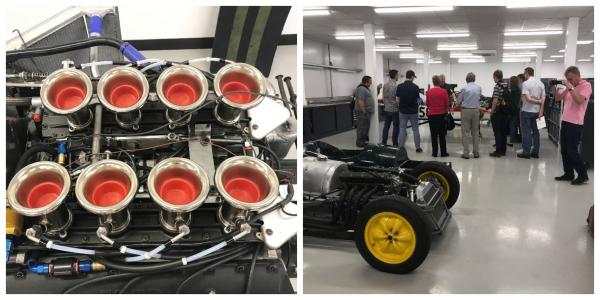 After periodically standing in awe of each car, we finally made it to the collection. Arguably, the best part of the tour! Upon first impressions, I was dumbfounded. I had never seen such a perfect collection of classic cars before- let alone from the same brand!

The collection was uniformly lined up. The light danced off the bodywork of each car, and it was each car’s way of inviting you for a closer look. The collection was vast, and it seemed to go on forever, but we didn’t mind as we were glad to be overwhelmed with such greatness and history with legends on display including the Type 49B/R10 that had recently returned from a key role in the 1,000th World Championship race in China plus one of our Directors favourite the Type 98T as driven by Ayrton Senna. It was honestly stifling how beautiful and charismatic each car was!

Strategically placed Towards the end of the collection, was a significant banner of Colin Chapman. It looked like he was gazing down at all of his success. I paused for thought... 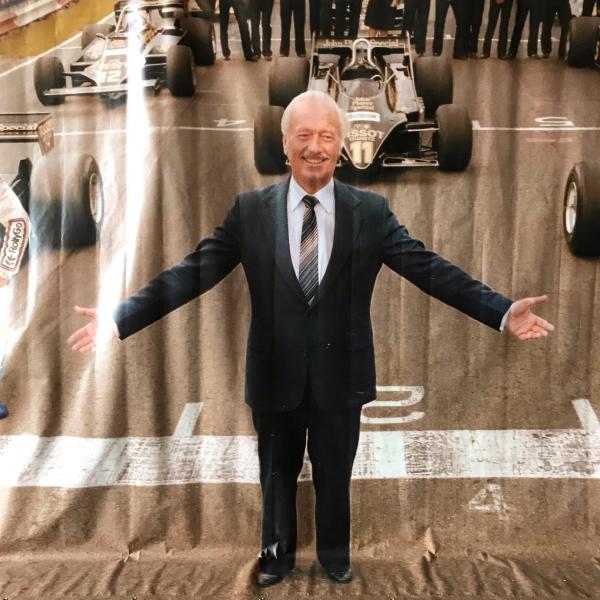 What a magnificent legacy he has created.

Adrian and I want to personally thank Classic Team Lotus for the invite, we enjoyed every moment of it. If you want to experience all things Classic Team Lotus, you too can sign up for their incredible tours here.