70 Years Of Triumph: Delve Into The History Of Lotus

As the 70th anniversary of Lotus draws nearer, Chatsbrook have a few words to say.

70 Years Of Triumph:Delve Into The History Of Lotus

Born in 1928, Colin Chapman was destined for greatness. Intrigued by all things automotive, during his late teens he spent his spare time reimagining cars. In 1948 he reinvented the Austin Seven Special, which he entered privately into a local racing event under the name ‘ MK1 Lotus’. That first race sparked a fire within him, and his passion for racing grew. The following year, he decided to enter into another race with the newer and improved MK 2. The MK 2 highlighted Chapmans forward thinking capabilities. As he strived to improve the power of his cars, he tinkered with inlet ports, port heads and exhausts which is what gave his cars the competitive edge at the races and led to his successes. 1950 was a poignant year for Chapman as it marks his change of interest in motor sport. In 1950 he entered his first race at Silverstone, where he took on a Type 37 Bugatti and won. From then on, his attention turned to building road racing sports cars. Cars that could be driven on and off the race track meant that his cars had the practicality to be driven by ordinary people, which would only further diffuse the beauty of motor sport craftmanship into society. 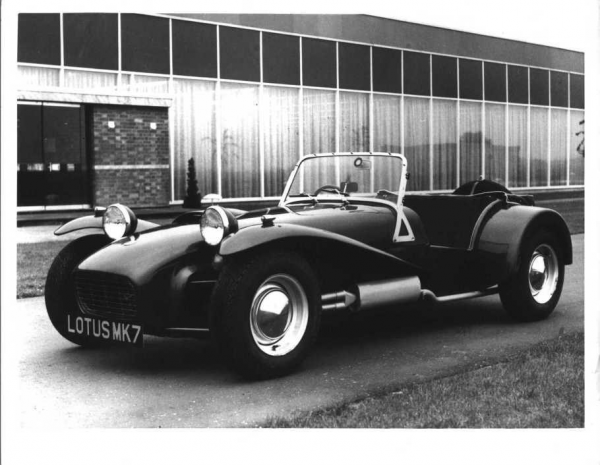 Chapman went on to reimagine many more cars, including the MK7 as shown above.

Since then the Lotus Engineering Company was formed on 1st January 1952. The 60’s showed steady growth of Lotus both on and off the race track. Jim Clark won two World Championships with the Lotus 25 and the Lotus 38, and there was a demand in the marketplace for the new Lotus Elan and Lotus-Cortina. The 70’s and 80’s is where Chapman became the unparalleled innovator. The Lotus 78 used bodywork on the underside that effectively created a venturi, these ‘skirts’ under the car kept the area of low pressure isolated which meant that cars were more stable when going round corners. This amount of downforce, had never before been imagined. Weighing 1250 pounds, the Lotus 78 generated an excess of 2000 pounds of downforce, which attributed to its six Grand Prix wins in 1978. The impact upon racing created by ground effects cars were so astounding that by the end of 1981 the ground effects Formula One cars were banned and replaced with flat bottom cars in 1982.

The image above shows the iconic Lotus 78.

Although Team Lotus withdrew from formula 1 in 1995, Lotus continues to be a leading figure in automotive innovation. Their recent additions and successes from the Elise, Exige and Evora only further highlight exceptional craftmanship, prestige and legacy.

Chatsbrook feel particularly connected to the Lotus Legacy, as our offices are located at the old Lotus headquarters at Ketteringham Hall. Leading up to their 70th anniversary, we felt it necessary to articulate our admiration for all their creations and triumphs. Each car that is crafted by the Lotus Group, honours Chapmans memory. These British sportscars embody a vision of the future, an appreciation and a legacy that could never die.

Our services make obtaining a world-renowned brand, like Lotus, easy. Our bespoke finance packages are tailor-made with you in mind, so that you don’t have to worry about costs. Call us now on 01603 733500 or email info@chatsbrook.co.uk to speak to our experts today.

Remember that to own a Lotus, is to own a piece of Motor Sport history.